No stories found
Stay curious! You'll find something.
Sign up freeLog in
Polling

SurveyMonkey Poll: Gun Control in the US, UK, Australia, and Canada

The United States of America is an outlier among its peers on the issue of gun control, not just in the relative ease with which Americans can obtain assault-style weapons, but also in the prevailing societal attitudes about guns in general. Compared to Australians, Canadians, and Britons, Americans are more apt to say gun violence is a major problem in their country and their local community, to worry they will be a victim of a mass shooting, and to have participated in an active shooter drill. They are also more likely to own a gun and to say having a gun in the household makes it a safer place. 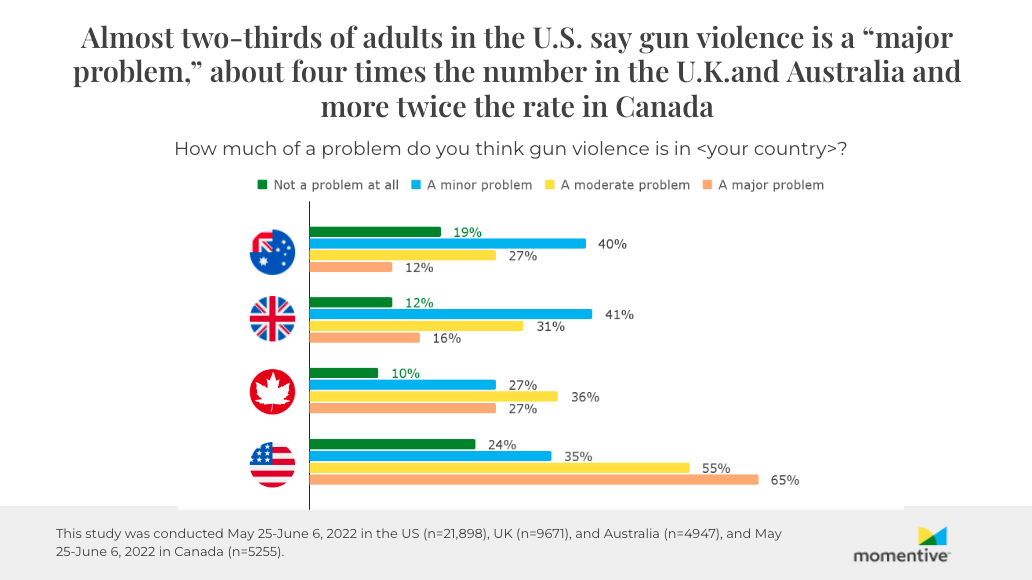 Almost one in three Americans (32%) owns a gun, and four in 10 (44%) live in a household where someone owns a gun. (These numbers match data from a 2017 Pew study on guns in America.) In the U.K., Australia, and Canada, gun ownership is in the single digits or low double-digits, reflecting the much more restrictive gun laws in these countries.

These comparisons hold among both adults and teenagers in all four countries. For example, 34% of teens in the U.S. “worry a lot” about being the victim of a mass shooting, about twice the rate among teens in the other three countries polled.

Click through all the results in the interactive toplines below: